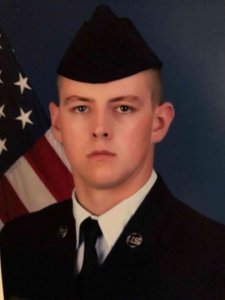 Some parents are just really good at raising their children. Take Larry Hunt, for example. During our last campout, I sat down with him to get a deeper understanding of how he was able to raise such a wonderful son. Right out of the gate, Larry said: “Rangers played a large part.” Initially, I was skeptical. Surely the few hours a month we spend mentoring boys helps, but can it make such a profound difference in a boy’s life? Well, it did in this case. Commander Stewart Miller of Towering Pines Outpost is Seth’s mentor. I remember him driving Seth over three hours to Camp Wilderness to simply turn around and drive back the very next day. That shows Stewart’s dedication, but those who know him know his commitment to Rangers runs far deeper than that and, according to Larry, it is that caring that influenced Seth to be the man he is today.

“You see, Seth used to be a real Momma’s boy” Larry shared as he leaned it to say: “I remember taking him canoeing as a little boy and him saying ‘I’m done. I am done!’ when his feet got wet.” Despite constant encouragement from his parents, Seth lacked confidence and remained afraid of everything. “When he was seven or eight years old, we put him in Rangers and immediately he attached to Commander Stewart’s authority and flourished. He was more willing to take on responsibility. He was respectful and his right from wrong become more pronounced, telling the naughty boys he was not going to join in because Rangers don’t behave that way.”

Larry has three awesome kids, but I’ve known his son Seth aka “Barn Door” the longest. This young man really impressed me when I first met him at JTC, his first Academy camp. He was the boy carrying a full tote with his patrol shelter and its poles balanced on top – on his own! The kid was like the Hulk, and he was only fourteen! During that camp, I mentored him in some of the skills we teach at the Academy, but it soon became evident that this kid had already mastered every leadership skill I could teach him. He not only stood out physically, but he also struck me as a kid of exceptional Ranger character. I loved hanging out with him when I could at Academy and FCF camps until he graduated some years later. You can imagine Larry’s immense pride when he heard Seth was awarded #1 Wingman of the 467th Flight when he graduated from his US Airforce Basic Training. What makes this a big deal is he is the first, since 1947, to get a unanimous vote!

Larry got very emotional when he told me that when they visited Seth at the Air Force Academy, Seth pointed to a slogan on the wall that read Service Before Self. “You see Dad,” he said “that’s what a lot of the guys here don’t see… everybody should serve their fellow man.” And that’s the pledge Seth lives by.

Seth has always been given responsibilities that kids his age wouldn’t normally get. He has also won several leadership awards for putting his team first to which Larry responds: “yup, that’s our Seth! He did it again. He’s a natural leader, but a natural servant too. You can rely on Seth for anything you need, God blessed us!”

But what makes Seth such a remarkable young man? “As parents, we instilled the Holy Spirit and got out of the way.” Is how Larry sees it. So what is the magic formula? Is it the dedication of a Ranger Commander bringing moral structure, wise parents that recognize how trust and responsibility are one of the most important life skills you can teach your child or a strong biblical foundation that develops young men like Seth? And he is certainly not the only one. In my relatively short tenure in this ministry, I have heard of or personally met dozens of Royal Rangers that live the Promise and embrace the Code. But Larry tells it so well. When he was a young father, the doctors told him he might have a fatal tick-borne disease. “Knowing I may not be here tomorrow, I made every day count. I raised my kids strong enough to survive on their own. All I want is for people to recognize them as a man/woman of God. By earning this Wingman award, Seth has done that, and for that, he is my hero”.

I agree Larry. I agree.

As Communications Coordinator, I maintain the web site and send out email promotions for the district. I get the inside scoop at the National LEAD conference, I'm in FCF, teach JTC/AJTC and practice on the Discovery Rangers class I teach at Bridge Church, Waukesha.

View all posts by Jody Smith →