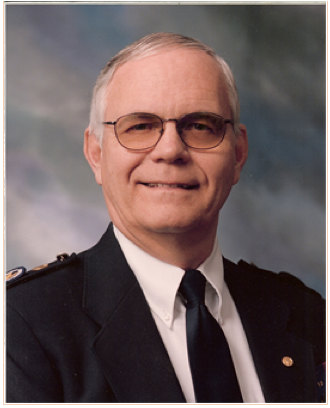 Gene Morrison started his rich history in Royal Rangers in 1962 and was quickly singled out by Johnny Barnes, who appointed him National Aid De Camp soon thereafter. By 1970 Gene attended his second National Training Camp (NTC) and was invited back the following year as an advisor. From there he served on NTC staff eight times either in the role of advisor or Assistant Camp Commander.

Gene organized trips to National Camporama in Idaho and Tennessee. Thought his tenure he also organized and ran the Royal Ranger of year initiative, Leadership Conferences for Commanders, Summer Camps…and the list goes on, but one of the highlights of his career was in 1992 when he appointed his son-in-law, Rob Wefel, to upgrade the Junior Leaders Training Academy, which went from just from one hiking camp to the several camp options we have today. The program was so successful, the National Royal Rangers office sent representatives to Wisconsin to observe and write the National standard for JLTC!

Gene’s vision of upgrading Camp Wilderness to a state-of-the-art camping and outdoor adventure facility came into existence when the deepwater well was drilled, and when the Training Center, kitchen, administrative office, bathrooms, and shower facilities were added to Hinther Lodge. The Amphitheater was revamped and a sound booth bleachers and cement stage were also added under Gene’s watch.

Gene was inducted into FCF in the early 1970s by Johnny Barnes himself.

Commander Gene Morrison has a true servant leader’s heart. He organized 22 teams to respond to Katrina in Mississippi and Louisiana, and was awarded the Silver Eagle 22 times! He also holds the National Medal of Merit (twice) and earned the National Outstanding Service award three times! But he will humbly tell you that all this was only worth it because, during his 50 years of service, an estimated 10,000 boys responded to altar calls at Royal Rangers events he oversaw.

Gene retired from Rangers in 2012, but the culture of the ministry he dedicated his life to still runs deep in his wife Sharon and children Lori, Christine, Paul, Charla, Sarah, Julie and many generations to come.

Gene has worked hard to record our Ranger history. Download his booklet here.

As Communications Coordinator, I maintain the web site and send out email promotions for the district. I get the inside scoop at the National LEAD conference, I'm in FCF, teach JTC/AJTC and practice on the Discovery Rangers class I teach at Bridge Church, Waukesha.

View all posts by Jody Smith →